WUC “Assembly” in Prague, an ugly collusion and aggregation of anti-Chinese forces: spokesperson for the Xinjiang regional government

“This is a ridiculous and absurd farce! Xu Guixiang (Xu), spokesperson for the regional government of the Xinjiang Uyghur Autonomous Region (northwest China), commented on the assembly of the “World Uyghur Congress” (WUC), a violent, terrorist and separatist organization is held from November 12 to 14 in Prague, capital of the Czech Republic.

In an exclusive interview with Global Times reporters Liu Xin and Fan Lingzhi (GT), Xu highlighted the nature of the WUC as a US-based terrorist organization that seeks to separate the Xinjiang region from China, and also revealed how the US National Endowment for Democracy (NED) has funded and came to an understanding with the WUC in guiding them to incite violence in China.

GT: The WUC claims to have invited “international experts”, “observers”, “NGOs” and “politicians” from a number of governments and international institutions to participate in the assembly. How do you judge the nature of this rally?

Xu: The WUC is an organization manipulated by the violent secessionist, terrorist and foreign forces of the “Islamic Movement of East Turkestan” (ETIM), and a political tool for anti-Chinese forces in the United States and the West to interfere in the affairs of Xinjiang and contain the development of China.

We strongly condemn any country or person supporting or participating in or attending the WUC’s activities, and we strongly oppose any interference in matters related to Xinjiang or in China’s internal affairs in any way.

GT: How is the WUC linked to terrorism? One of its main leaders, Rushan Abbas, is active in the Western media. What are the real faces of these people?

A large number of facts have shown that the WUC played a role in most of the recent violent terrorist attacks in the Xinjiang region.

For example, in February and May 2017, Dolkun Isa, head of the WUC, identified as a terrorist by the Chinese government, organized a “strategic seminar” in Berlin, planning to consolidate terrorist forces abroad to establish armed forces for prepare for incitement to violence in Xinjiang.

On March 10, 2018, Seyit Tumturk, one of the former WUC leaders, rallied 400 separatist members, wearing military uniforms and brandishing guns to record a violent terrorist video, threatening to launch a terrorist attack in Xinjiang. In March 2019, Rebiya Kadeer, the former head of the WUC, posted an online audio message saying that the “East Turkestan Education and Solidarity Association (ETSA)” is working with the terrorist group ETIM to send information. jihadists in Syria. In addition, WUC has also partnered with ETESA to carry out similar activities.

As the main leader of the WUC, Rushan Abbas has long worked for US intelligence agencies and military institutions. Anti-Chinese forces in the United States even changed her name to a so-called “human rights activist.” Likewise, Dolkun Isa, Rebiya Kadeer and other terrorists with criminal records have become members of the WUC. They compete to act as a front against China in the United States to attack the Chinese region of Xinjiang, and are the absolute spokesmen for terrorism. 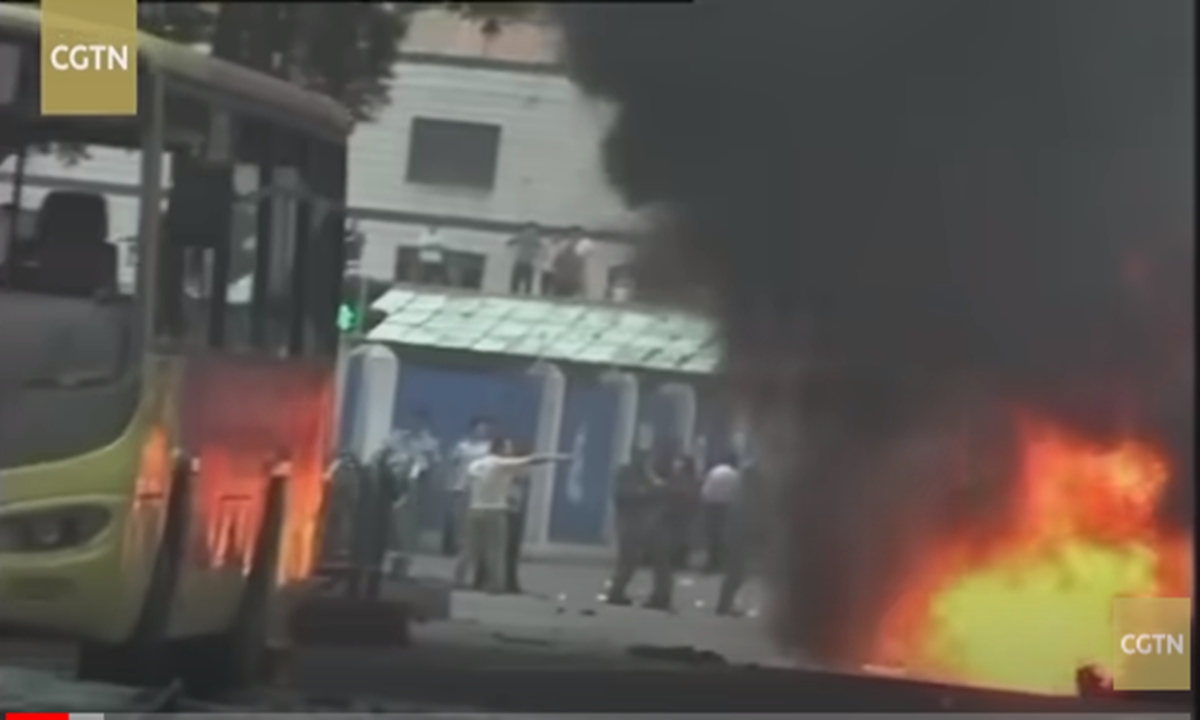 Images of violent terrorists setting fire to a public place in Xinjiang Photo: Screenshot of a documentary on the fight against terrorism in Xinjiang

Xu: The United States and other Western anti-Chinese forces are the main supporters and manipulators of the WUC. They actively promoted the expansion of the WUC to use it as a “strategic tool” against China in a long-term fight, and increased their support for separatist forces overseas, including the WUC, trying to make it an asset against China.

For example, he actively manipulated the leadership of the WUC, cultivating a backbone and painstakingly making it the most influential separatist organization abroad. Several American politicians have met with WUC leaders and expressed their support. US intelligence agencies and NGOs have gone to great lengths to retain the “young generation” and meticulously plan the future of the WUC.

The NED, for example, has provided strategic guidance for WUC’s activities, demanding that the organization seek the support of international society and promote the internationalization of subjects in Xinjiang through non-violent means and in the name of “democracy. and human rights ”. He also asked the WUC to focus on its work in China and start mass riots such as “street revolutions”.

In addition, NED has also provided special funds for projects such as “training classes” and “seminars”. They also paid salaries to top WUC leaders, making them “professional anti-China activists”.

The independent US news site The Grayzone published a report in March 2020 uncovering the truth about WUC funding, showing that the WUC was led by the United States and that the NED, WUC and “Radio Free Asia Had agreed to contain China.

Xu: For a long time, a few countries blamed China’s policy in the Xinjiang region and continued to provocate on the subject. Regardless of the truth, they smeared and attacked China. The WUC held this meeting in Prague, Czech Republic, which exposed its attempt to gain some support from those countries, and also showed the Czech Republic’s nod to anti-Chinese forces.

We must stress that matters concerning China’s internal affairs are just that and that no external force has the right to intervene. The issues related to Xinjiang are not about ethnicity, religion or human rights, but counterterrorism, anti-filtration, anti-separatism and anti-interference.

In the face of terrorism, the Xinjiang region has taken a series of firm and effective measures against terrorism and de-radicalization, which have dampened the momentum of frequent terrorist attacks and have maximally protected the human rights of all ethnic groups. We strongly oppose the politicization of human rights topics in Xinjiang.

We urge the Czech Republic and some other countries to know the anti-Chinese essence of WUC, to respect the basic code of international relations, to respect the truth and to let go of ideological prejudices, and not to engage in manipulation. policies promoting Xinjiang. -related matters or interference in the internal affairs of China.

GT: The WUC has unleashed a wave of insults against Xinjiang on social media platforms abroad, fueling the spread of disinformation. What do you think about this? Faced with the proliferation of false information about Xinjiang abroad, does the Xinjiang regional government have measures to deal with it?

Xu: It is necessary to have genuine and reliable sources of information to make correct assessments and judgments on Xinjiang-related cases.

The WUC maliciously distorted the facts and used false witnesses, images and data to fabricate so-called “evidence” and disseminate a lot of “information” abroad, which is extremely absurd and has gravely tainted Xinjiang- related public opinion environment.

People of all ethnic groups in Xinjiang have the final say on what the Xinjiang government has done. People who have lived and visited Xinjiang are the real and direct sources of all information related to Xinjiang.

However, anti-Chinese forces in some countries, ignoring these reliable sources of information, only believe lies. It only proves that they don’t care about the truth, but are looking for excuses to meddle in Xinjiang issues and interfere in China’s internal affairs.